Smokey Bear may be the spokes-animal for the prevention of wildfires but it’s the goats who actually do the work. Before and during fire season, these four-legged fire abatement “machines” can be seen throughout Orange County munching and lunching on our behalf. More than 6,000 wildfires sweep through California annually. At the time of this writing, our state is engulfed in flames from north to south. Fueled by a lethal combination of dry brush and dry weather, Orange County has had more than its share of deadly wildfires in the past five years. It is understandable that homeowner associations are concerned during this unprecedented drought. One spark can ignite an entire hillside in minutes. As there are many canyons in Orange County, the winds that whip through these ravines feed the fires and drive the flames straight to the brush. Historically, Boards of Directors wrestle with the ever-present issue of fire prevention and brush abatement. One answer is catching on like well, wildfire. Goats. Why goats? Goats can be employed effectively on almost any terrain, especially slopes. Man and machines are just not made to hop and navigate steep slopes; whereas, those same slopes are all in a day’s work for a goat. George Gonzales, owner of Ranchito Tivo Boer Goats, based in Chino, said that he has seen men on tractors topple and slide down a slope of sandy soil while attempting to clear browning brush. The potential for human injury and medical costs in addition to equipment damage is high. This summer, Gonzales and his goats were hired by Window Hill Homeowners Association in Anaheim Hills to create a firebreak clearing on a steep slope. In the past, a landscape crew has been able to clear only 100 feet up the slope due to the steepness of the hill. This year, the goats cleared 300 feet of the slope (all the way up). That is two-thirds more terrain than humans were able to clear. The landscape costs for 100 feet of human clearing were $14,700. The cost for the goats doing the job all the way up the 300-foot slope was $6,500. Cardinal Senior Account Manager and Director of Property Management Karen Holthe worked with the Window Hill board to procure the goats. “Using the goats was so much safer, and the fire break is a great deal wider than humans could accomplish,” said Karen. “In addition, using the goats greatly enhanced the safety of the community.” As with any new project or process, one anticipates a few glitches or homeowner complaints. “Homeowners loved the goats,” said Karen. “They told the board that the goats were quiet and they liked watching them. All comments to the board were positive.” Goats eat a wide variety of plants. “They consider poison ivy and oak to be a salad bar,” said Gonzales. His wife Liz is co-owner and a veterinarian. She keeps abreast of the health of their herds and the potential effects of specific plants on goats. While a human work crew can certainly cut down poison ivy and oak in a day or two, they are off the job for the next two weeks scratching and recovering. Goats simply eat the problem brush and weeds rather than chopping them down like humans and machines. Hence, there are few to virtually no dump fees. And who wants to haul away poison oak and ivy among the other prickly plants that goats love to eat? Goats also munch the brush to within four or five inches of the ground before the herdsmen move them along. This ensures the integrity of the slope when the rains return. Sheep pull grasses out by the roots, actually promoting erosion and mudslides later in the year, resulting in a completely different category of damages and cleanup. Earlier this summer, California Governor Jerry Brown declared a state of emergency throughout California, as wildfires raged in our parched state. Brown said that the severe drought and extreme weather “have turned much of the state into a tinderbox.” Community associations can be highly risky environments during wildfire season as the brush on communal slopes and hillsides becomes crispy, and homes are densely arranged. “The use of goats is one of many ways to accomplish the required defensible space fire departments need to help defend homes from an oncoming wildfire,” said Nick Pivaroff, Assistant Fire Marshal for the Community Risk Reduction Department of Pre-Fire Management for the Orange County Fire Authority. Boards sometimes consider herbicides and pesticides to clear plant material from associations. This does work. However, the cost to the environment is high. Consider that multiple varieties of insects make their homes in the brush and weeds. Spraying kills the weeds and the insects. Next come the birds that swoop in for a worm or a cricket. The birds eat the insects full of deadly chemicals and they die as well. In addition, herbicides and pesticides have the potential to render the ground infertile. This abatement option can be expensive and unhealthy. As the book title tells us, “Everyone Poops.” Oddly enough, goat pellets do not have the malodorous effect that sheep or cow dung have. The droppings are small, odorless, and biodegradable. They enrich the soil and do not have to be cleaned up or hauled away. If you would like a lawn worthy of a golf course green, don’t look to a goat to get the job done. However, if you need to clear acres of heavy brush infestation safely and efficiently, you might consider putting the kids to work. 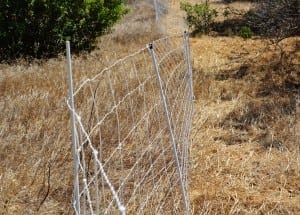 Before and After. A movable electric fence divides the tall crispy brush (on the left) before the goats are turned loose to eat in the Window Hill Homeowners Association in Anaheim Hills from the chomped brush after the goats completed their job (on the right). 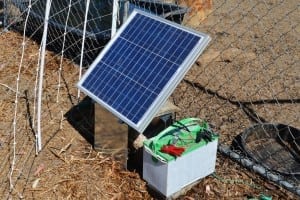 A dinner-plate sized solar panel powers the battery that electrifies the movable fence that keeps the herds on the right path.

The Morning Commute. Several herds of goats are on their way to their assigned hillside for breakfast in a community association in Orange County.

Hey, Look At Me! As goats munch their way through acres of crispy brush, they sometimes take a moment to head butt and frolic. The kid in the upper left corner photo bombed the center of attention.