Does Your Association Have to Install Pool Lifts? 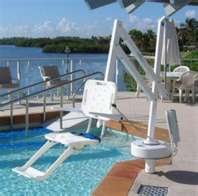 Guest Post by David A. Kline of Fiore, Racobs & Powers, A PLC

The Americans with Disabilities Act ("ADA") requires places of public accommodation to remove architectural barriers to improve access for people with disabilities.  The 2010 ADA Standards for Accessible Design require the installation of pool lifts by March 15, 2012.

Not surprisingly, many companies that install pool lifts have been citing this requirement to convince homeowners associations to comply with the ADA.  This may not be necessary.

Generally, common area recreational facilities, including pools and pool areas, are residential amenities that are available for the exclusive use by owners and their invited guests. These common area facilities are not open to the general public.  Accordingly, the ADA does not apply to most homeowners associations, because their facilities are not considered “places of public accommodation.”  However, if an association opens its facilities to members of the general public, or operates like a hotel, it may wish to seek legal advice about the applicability of the ADA.

Associations are subject, however, to other State and Federal laws which prohibit discrimination based upon disabilities.  So, if a resident with a disability requests the association allow installation of a pool lift or requests other types of accommodations/modifications based upon a disability, the association should seek legal advice, because the Fair Housing Amendments Act may require a reasonable modification to the common area or other portions of the project. Such requested accommodations and modifications would be paid for by the resident, not the association. This article was reprinted with permission from Fiore, Racobs & Powers.  To learn more, visit their website at fiorelaw.com  Article update March 16, 2012: For those Association's that are considered "public" for the reasons stated above, the Department of Justice has issued a 60-day stay to comply.  Read this article to learn more http://p.washingtontimes.com/blog/inside-politics/2012/mar/15/pool-mageddon-avoided-now/.